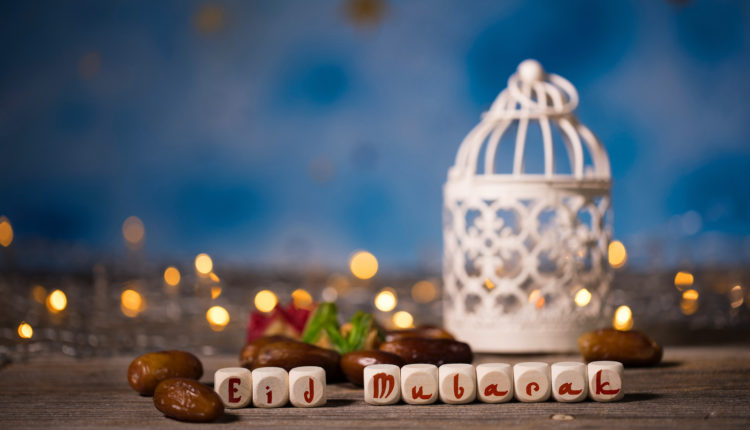 Regardless of the time in his life, the Prophet (ﷺ) always turned into a different spiritual state when Ramadan comes. He also encouraged his companions, reminding them that they should help the needy at every opportunity during this month. There was another special reason that required this reminder during the last days of Ramadan: Prophet Muhammad (ﷺ)would say that everyone regardless of his/her position in social life should give a fitr (fidelity) charity to the best of their ability, and stated that this should happen before the feast day, so that it would help those in need to celebrate Eid as well. 2

The Messenger of Allah (ﷺ) would start the Eid day with ablution, as he did when he was doing every important work. He took care of his clothing, perfumed himself with good scents and wore a turban on his head. 3We learn from him that on Arefe day(the day before the Eid) and Eid days we should pay special attention to clothing and cleanliness.

On Eid al-Fitr, The Prophet (ﷺ) would then eat a few dates to signify that he was not fasting on Eid days. 4 The situation was different in Eid al-Adha; that day, the Messenger of Allah (ﷺ)) started to eat and drink with the liver of the sacrificial he had cut. He made a sermon on one of the Eid al-Adhas and said, “We start the day with prayer, then we sacrifice; whoever does this means that he has conformed to our sunnah! ”

He would take different paths to the mosque for prayer and back to his house. By doing so, he would inspect the town to check if there were any people in need in the streets. Along the way, he would recite takbirs. 5

In the mosque of Musalla, he only performed the Eid prayers; he did not perform any other prayers before and after, but instead spent his time with his companions. After his prayer, he returned to his companions and gave a sermon. In this sermon, which he started with “Praise to be Allah,” he often reminded of the truth of Allah and the hereafter. In order for everyone to see him, he would say his Eid sermons on his mount, during which  the leading companions would sit around and listen carefully. During the sermon, he would not forget the needy and would encourage charity. 6

When the prayer was over and the time came to visit the houses, Prophet Muhammed (ﷺ) stood in the middle of the mosque and watched his companions scattered across Madinah. Then, he (ﷺ) would also visit the market and check in with the people there.

According to his statements Prophet Muhammad’s (ﷺ)  Eids were the days of eating, drinking, remembering Allah, and celebrating. Therefore, it was considered as an islamic custom to have fun on these days and fasting was considered haram(banned). 7 So, Prophet Muhammad’s (ﷺ) would encourage celebration on Eid days.  For example, on an Eid day, he watched a group of Sudanese people play drums in the Mosque and invited Aisha to see it.  Some women would sing poetry.

As the following story demonstrates, sometimes, his companions would react to such celebrations, but Prophet Muhammad (ﷺ) would continute his encouragement:

Two young girls from Ensar came to Hz. Aise on Eid day and sang Buas folk songs about their heroism. They were having fun together. Meanwhile, Hazrat Abu Bakr (radiyallahu anh) came by. He was startled when he saw this scene: “The murmurs of Satan in the house of the Messenger of Allah!” he said.  He had started getting angry with her daughter Aisha. Prophet Muhammed (ﷺ), who was aware of the matter, turned to Hazrat Abu Bakr and said, “Oh  Eba Bekir!” said. “Every tribe has an Eid; this is our Eid!”

Children were also able to get their share from the Eids of our Prophet (ﷺ); He would sit and talk to them, listen to their troubles and tenderly caress their hair. Once, he saw a crying boy with a neck down, in old clothes. He slowly approached him and said, “My Son! What is your problem? Why are you crying?” The child, who had not realized that it was the Prophet (ﷺ) who asked this question, said “Whoever you are, go away!” but then began to share: “Because my father was martyred while fighting with the Messenger of Allah, my mother married another person. He took everything away from me and kicked me out of his house! I have neither food nor drink nor clothing! I don’t have a house! When I see those children who have fathers who fulfill every wish, caress their heads and buy new clothes for them on the day of the Eid, my sadness is increasing. I feel lonely and cry.” Thereupon, the Messenger of Allah (Prophet (ﷺ) took the child by the hand and said,  “Let me be your father from now on; may Aise be your Mom, Fatima is your sister, Ali is your uncle, and Hasan and Huseyin are your brothers.” The child, who realized that his addressee was the Messenger of Allah (ﷺ) held his hands, forgot everything of his past and looked at his blessed face with smiling eyes. 8

Lastly, Prophet Muhammad (ﷺ) also celebrated Eid nights with worship. He would encourage  his companions to spend the Eid nights with deeds that Allah (celle celâlühû) would be pleased with: “Whoever spends the nights of the two ‘Eid in praying voluntary prayers, seeking reward from Allah, his heart will not die on the Day when hearts will die.” 9

The Holy Qur’an and Ramadan