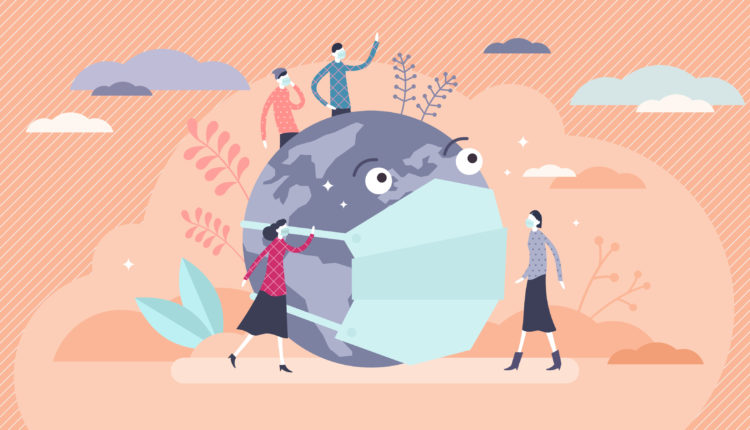 Our Prophet (pbuh) advised some suggestions to be protected from contagious illnesses as well as the cleanliness of the body. When we look at medicine in the light of the information he provided, we see that the first enunciator of microorganisms is the Messenger of Allah (pbuh). He emphasized that the plague has a harmful factor which can not be seen with naked eyes and quarantine is required to prevent the spread of the disease. Also, he implied and indicated that plague-causing microbes are transmitted to the human body from the outside.

Covering The Mouth While Yawning

Lung diseases constitute the majority of the diseases which are transmitted by air. The microbes in the air cause illness when a deep breath is taken, going down to bronchus and lungs. Messengerof Allah(pbuh) said: “When you yawn, put your hand on your mouth because harmful things may get into your mouth.”1 We must cover our mouth in order not the microbes in the air to go down to the air cells passing the tonsils. So we would prevent the diseases which may transmit into upper and lower respiratory tracts by air.

Distance to Prevent the Spread of Infection

In the 19th century, after the dust particles and microorganisms were seen by microscope, the consideration of distancing between sick people and healthy ones are included into medical norms.

In medical history, the issue about the distancing among sick people was remarked by the Messenger of Allah for the first time by the hadith: “Beware from the leprous as if escaping from a predatory animal. Whenever a leprous comes down to a valley, you go down another valley. Do not look at the leprous patients consistently. Whenever you talk to them, leave one or two length of spear of distance between you and them.2

Throughout history, millions of people have died of plague (taun) , pyrexia, malaria, and several viral diseases which threaten people and cause mass fatalities. Mass epidemics which occur in the past centuries are always remembered with terror. Let us pay attention to the sayings of Prophet Muhammad(pbuh) about these issues. “When you hear that a plague is in a land, do not go to it and if it occurs in a land that you are already in, then do not leave it to  flee from it.”3. Our Prophet (pbuh) described quarantine here exactly and guaranteed the practicability of it by the statements above.

Just as Our Prophet (pbuh) recommended sick people quarantine in order not to infect the healthy people he also prohibited gathering sick animals along with the healthy ones. In one of his hadith, he stated that : “The sick animals should never be got together with the healthy ones.”4 Plague(taun) is an inflammatory fatal epidemic; pestilence, malaria, measles, smallpox, AIDS, and the disease that will occur afterwards are all called taun. Whatever the epidemic illness is, Our Prophet (pbuh) said that : “There is danger to get close to an illness.”5

Distribution of Functions in Hands

Our Prophet (pbuh) used his right hand for cleaning (the body in wudu) and having food , his left hand for cleaning (in restroom) and grimy works.6 When you clean and wash your head, mouth, nose and skin with your left hand, you will unconsciously contaminate the clean areas and that is contrary to health principles. When the history of medicine is examined, it is seen that the only person who distributed functions regarding hands is Our Prophet (pbuh). He recommended to use the left hand in all grimy dealings and the right hand for sanitary doings. He liked to start from the right in his cleaning, brushing, putting on his shoes.7 We need to use the left hand to touch any waste of the body such as stools, urine, phlegm, sweat, mucus or the organs that those come out. In doing so, we will not have transmitted pathogens to the clean areas of the body.

Microbes can be transmitted to the food which is carried uncovered by the carrier’ s cough or sneeze or a fly, an insect or by air. Abu Hurayra (ra) says that: “Our Prophet(pbuh) used to cover his mouth with his hand and some part of his clothing when he sneezed and lowered his voice.”8 This action of Our Prophet (pbuh) is a miraculous conduct which is inspired by him by revelation to protect people in the environment from epidemic diseases.

It is quite significant to have the utensils covered and clean in terms of health.Thus, Our Prophet (pbuh) stated that: “Lock the doors when you sleep(at night). Tie the beaks of water containers. Turn the empty utensils upside down. Cover the filled utensils and switch the lights off. Because evil creatures can not open locked doors.”9 If there is someone at home coughing, microbes may be transmitted into uncovered utensils. Also, any food or drink containers should be kept covered in order not to be contaminated by pets, flies, insects or rodents.

Making sure Urine does not Smear onto Clothing

Our Prophet (pbuh) paid much attention to the cleanliness of his clothing. He warned his companions not to transmit any media in which microbes can easily grow to clothing. In one of the hadith, he  said: “When you need to urinate, look for a mellow area in order not to splash urine on your clothing.10 He took great care not to soil his clothing.

Microorganisms need to have polysaccharides, fat, proteins, nitrogen, enzymes, sulphide (in coenzyme and protein structure) phosphorus, oxygen, hydrogen, potassium, magnesium, iron as a source of carbon to grow. As blood consists of all these together, it is used to enrich several liquids in medicine. In blood, microbes grow more easily and fast. Once, Our Prophet (pbuh) got his blood drawn and gave it to Abdullah ibn-i Zubayr saying: “Come on! Take this blood away. Bury it in the ground in order not any humans, dogs, predators to lick it.”11 Alongside with the sensitivity of cleanliness, the most significant purpose in this advice is getting attention that blood is an available media for microbes to grow and to prevent the transmission of microorganisms possible in blood by animals.

Our Prophet (pbuh) said that: “When one of you blow your nose in the masjid or spit out the wads of phlegm, remove it so that it does not harm any Muslim by contaminating their skin or clothing.”12 Also, he stated: “When one of you spit out in public, conceal it by your palms and do not show it anyone until you bury it.”13 The earth mentioned here should be one that is remote. And, the only area that microorganisms in bogey and phlegm transfer into its compounds and become harmless is the earth.

Our Prophet(pbuh) expressed that swamps should be rendered in a state that would not cause any harm like malaria particularly, with this hadith: “When Aisha came to Madina from Mecca, Madina was the most ailing area of Arabia territory. Our Prophet (pbuh) recommended to drain the Valley of Budhan.14

Aisha (may God be pleased) says this: “The Prophet (pbuh) ordered the burial of seven things from the human body. These were: hair, parings of nail, flowing blood, menstrual pad, (fallen) teeth, clotted blood, placenta.”15 Our Prophet (pbuh) is the first to recommend burying of blood and blood clot , hair and nails as they are contaminating and they may be available media for microbial growth in humans and animals when not buried.

Keeping  the Areas That Living Beings Use Clean from Pollution

Each and every Muslim should keep his environment clean as he keeps his house clean, should not pollute the sources of water. Our Prophet (pbuh) paid special attention to environmental cleaning. He prohibited to urinate in the shade of trees, in a place of shade , in a water source, in standing water, on a path, into a burrow and in an animal shelter.16 Once, Our Prophet declared so: “Beware not to be one of those who suffer the curse.” Companions asked: “Who are they?” So, he answered that : “The people who contaminate the paths that everyone pass by, the places of shade, waterfronts and under the trees by urinating.”17 He wanted everything that is harmful for people to be removed and considered it one of the parts of faith.

Our Prophet (pbuh) did not approve of breeding infecting animals in the areas which are crowded all the time due to hajj and umrah like Mecca. He ordered not to get any dogs except from hunting dogs, sheep dogs and dogs used in agriculture.18

Animal products can cause food poisoning if they are consumed half-baked. Half-baked sea products, digestive tract and urine waste, raw meat products, not washing hands after touching animals or breathing the air with germs may cause diseases such as typhoid, enterocolitis, pneumonia, plague, mesenteric adenines, brucellosis, meningitis.For protection from those illnesses, we need to reclaim food as the Prophet (pbuh) advised. As we have found out from several hadiths, the environment and food should not be contaminated by animal and human waste, pork should not be eaten. Clothing and the body should be washed after riding a mount.

Taking Care of Common Areas Such as Public Baths and Pools

The people who have fungal infections should not be let into the public baths,pools or those people should not go to such places. Fungi cause illnesses which are resistant to treatment and it is difficult to treat them. It may occur again even if the disease is cured. In the Prophet’s (pbuh) time, there were not any public baths in Arabia.But he stated in tidings as occult that: “Persian region will soon be conquered. You will find houses called hammam there. Men should not go there without loincloth and prohibit women from entering there unless they are sick or have delivered a baby” (S. Kubra, I. Mace, Bagdadi). Healthy women should not enter there in order not to catch an illness. In a hadith, he said this: “One who has faith in Allah and the hereafter, do not go to hammam without loincloth.”19 He also prohibited opening the private parts up as it may trigger some nasty doings.

If the rules that the Prophet (pbuh) brought were practised, there would not occur any of the epidemic diseases in history. As a matter of fact, the World Health Organization(WHO) also claims to come to the same conclusion when carrying out the hygiene rules. Whereas, the rules that Islam brought enabled a clean life. Islam originated as a religion which shapes the style of people’s lives. All humans have a right to live in a neat environment. However, Our Prophet (pbuh) had shown and practiced himself the most extensively and in detail the preventive medicine measures which is enough until the doomsday for the ummah, who live in crowded cities.