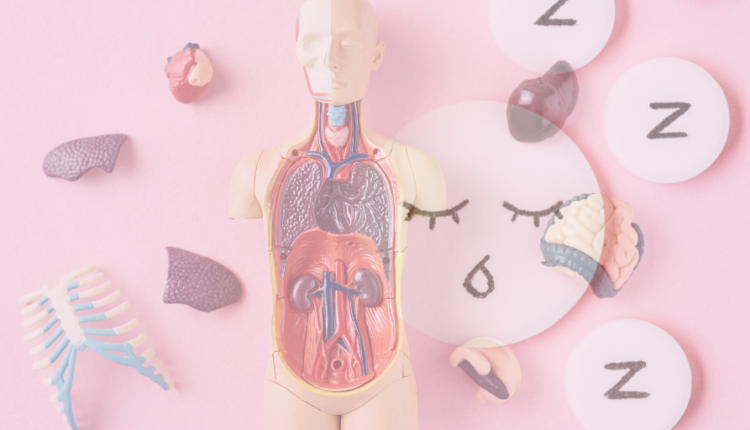 Each new product we purchase has a user’s manual. Carefully read and used according to the recommendations, the life of the item will be long. The human body is no different as a user’s manual is required for good health. For example, the lifetime of the hip joint can be many decades if we take care to exercise and treat it properly. If not, calcification occurs and the duration of quality is shortened. Likewise, if we brush our teeth and follow the recommendations, decay can be restricted. Preventive medicine can reduce the likelihood of many diseases.

It is understood from the hadiths pertaining to the sleeping position, our Prophet ﷺ would lay on his right hand under his cheek while lying on his right side.

Abu Hurayra said, “The Messenger of Allah, may Allah bless him and grant him peace, said, ‘When one of you goes to bed, he should undo the inside of his lower garment and dust the bed with it. He does not know what has come on his bed since he left it. He should lie down on his right side and say, ‘In Your Name I have laid down on my side. If You take my soul, then have mercy on it. If You release it, then preserve it in the manner in which You preserve the men of right action.’”

Al-Bara’ ibn ‘Azib said, “When the Prophet, may Allah bless him and grant him peace, went to bed, he laid down on his right side. Then he said, ‘O Allah, I have turned my face to You and I have surrendered myself to You and I have committed my back to You out of fear and desire for You. There is no place of safety or refuge from You except with You. I have believed in Your book which You revealed and Your Prophet whom You sent.’ He said, ‘Whoever says it at night and then dies, dies in fitra (natural state).’”

Whenever the Prophet (ﷺ) intended to go to bed, he would recite: “Bismika Allahumma amutu wa ahya (With Your name, O Allah, I die and I live). And when he woke up from his sleep, he would say: “Al-hamdu lil-lahil-ladhi ahyana ba’da ma amatana; wa ilaihi an-nushur (All the Praises are for Allah Who has made us alive after He made us die (sleep) and unto Him is the Resurrection).”

Organs need more oxygen during exercise, and less at rest. The circulatory system plays a major role adjusting this need. During sleep, the heart rate slows down decreasing to 70bpm while excess blood is stored in the veins.

Anatomically, the veins that bring blood to the heart entering from the right of the heart, and the artery (aorta) that distributes blood to the body exits from the left. Excess blood is stored in the veins, liver, and portal vein (veins that bring digested nutrients to the liver) so that the heart can draw less blood. To assist the storing process, sleeping on one’s right side will allow gravity to ease the process.

Sleeping on the right side will be the most suitable position for storing blood and lowering the heart rate in response to the decreased oxygen need of the organs. Due to the dominance of the parasympathetic system during sleep, the heart rate and flow rate decrease. This is aided with the right lying position

The human heart is normally capable of pumping 13-15 liters of blood per minute. But at rest, it pumps 3-5 liters of blood. It is necessary to decrease the vein return to the right atrium of the heart to lessen the cardiac output during sleep. Storing is possible with the right lying position

Veins must remain open for the storing of blood. The negative pressure of the lungs serves this purpose. Without negative pressure, the main veins returning to the heart would be closed with the suction effect of the heart.

Sleeping on the right side helps negative pressure. The blood that is pooled in the veins along with gravity allows the veins to remain open.

When we look at the anatomy of the portal vein, which carries nutrients to the liver, it follows a path from the midline of the body and enters the liver on the right. A person lying to the right, then, will facilitate the flow of the portal vein downstream. The direction of the lower venous vein from the liver to the stomach and spleen also flow to the right as an added advantage.

Activity of the Nervous System

In addition, secretion increases in the glands outside the pancreas and the enzyme secreting cells. The lung bronchi narrows and the contractile strength of the heart decreases. The coronary vessels of the heart expand, the urinary bladder relaxes at the entry point into the bladder, and pancreatic acetylcholine is released. When the amount of released water is low, pancreatic secretions are stored.

So, when starting to sleep, a position on the right is important so that all affected organs and body systems help the parasympathetic effect. Let’s see how this is appropriate by examining the organs.

When an unusual object goes into the trachea, it usually goes to the right lung. This shows that, as an anatomical structure, the right lung’s ability to breathe air is superior to the left lung. The large right bronchus shows that the right vent is more capable than the left.

Lung bronchi narrow because of the parasympathetic dominance in slow wave sleep. Since the basal metabolism of the body lowers, the oxygen need of the tissues decreases. When we lie to the right, not much air enters, since the opening of the right lung will be partially restricted. It receives enough oxygen for the body as a result of the narrowing of the bronchi and the fact that the right rib bone does not stretch too much. The right position for the lungs is good in terms of ease of entry of air into the right lung, contraction of the bronchus, meets the need for less oxygen and supports the parasympathetic activity.

Heart: The heart is located in a membrane bag called the pericardium between the right and left lungs. It is turned forward and left around its axis positioning the right ventricle forward of the left.

Parasympathetic activity during sleep increases the contraction of the gallbladder and biliary tract. The bile in the pouch passes into the biliary tract which opens to the 12 finger intestine with a soft slope to the right. The effect of gravity in a person lying to the right helps with parasympathetic activity and easier discharge of bile into the 12 finger intestine. Although peristaltic (alternating wavy contraction) movements of the biliary tract transport the bile to the right place, the right tilt will be helpful. It is a way of Prophet Muhammed (pbud) to lie down not immediately after a meal, but when the stomach is empty. This reclining coincides with the time when the bile is discharged the most and assists the emptying.

Stomach: It is an organ that takes shape according to its position, whether it is full or empty. When the stomach is full, it expands in all directions, the shape and condition of the full stomach changes according to the state of the body. When we lie on your back with a full stomach, the stomach goes up. The top part, the fundus, expands and slides to the left.

The empty stomach is located to the left of the midline and only the exit of the stomach is to the right. Its shape resembles the intestine. While empty, the front and rear walls are in contact with one another. The large upper part maintains its width and negative pressure prevents walls from sticking together. There is not much change in the empty stomach. The ideal gut-shaped stomach is achieved when hungry and lying down.

For those who sleep with their stomach empty for 1-3 hours, the first two hours of sleep are called slow wave sleep. If one is lying to the right, the contents of the intestine are more easily transferred from the small intestine to the large intestine with the help of gravity.

A person eating dinner should pay attention to:

1- As Prophet Muhammed ﷺ commanded, he should not go to bed before the night prayer and not lie down on a full stomach.

2- Depending on the type of food and the amount, attention should be paid to the amount of time it takes to transit through the digestive system.

Reflexes: Of the many reflexes in a man, we must pay particular attention to the lying position which we call the tonic labyrinthine reflex. When the head is turned to the side, the deep neck sensory receptors are stimulated, the legs toward which the head is turned are stretched and the opposite side responds by bending the arm and leg joints to prevent strain.

When we lie down on our stomach, we have to turn our head to the side. In this position, tonic labyrinthine reflex is stimulated. Since the muscle contractions will continue in those lying by turning their neck to the side, there is no muscle rest.

When our Prophet ﷺ was lying on his right side, so as to relax the muscles, he also slept with his hand on his face to stretch his shoulder and elbow. If we do not put our hand under our face, the head will bend towards the shoulder, the head will be distorted and the anatomical position will be less than desirable as it will create curvature in the neck with the muscle on that side contracted. His most ideal position was also lying with his hips and knees bent.

Considering the functions and anatomical structure of the organs, it is seen that the optimal position while sleeping should be on the right side. The second best position is to lie on your back because a person cannot sleep continuously in one position with regard to the stimulation of the pressure receptors.

Abdul Muttalib and his relationship with his grandson Prophet Muhammad ﷺ