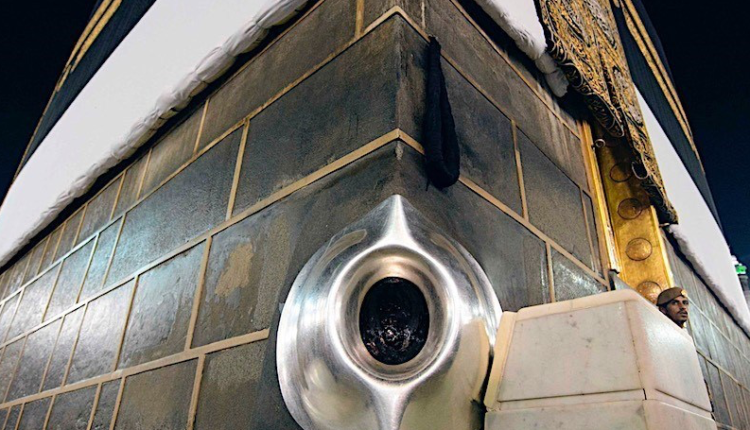 When Prophet Muhammad ﷺ was thirty five years old, one of the most discussed topics was the repairs to be done to the Ka’ba. A thief had got in through the walls that had fallen apart and had stolen certain precious things from it. A woman had set fire near it and the flames had inflamed the cover of the Ka’ba and burnt it. The Quraysh took all this into consideration and decided to repair the Ka’ba. A ship had recently run aground on the shores of Jeddah and news had come that this ship was full of the material needed for the repairs. Moreover there were workmen in the ship who could carry out the repairs. Without much ado, a delegation headed by Walid ibn Mughira went and bought the material that was needed, and they took the master workman Bakum of Greek origin with them and then returned to Mecca.1

When it came to distribution of the work, there was immediately some tension, for all tribes wanted to gain credit for such an honorable job as repairing the Ka’ba. At the end, each wall was designated to a certain tribe for repair.

But before rebuilding, they had to tear down the walls and no one had the courage to do that. They feared that some curse would befall them. It was Walid ibn Mughira who first mustered the courage to hit the first blow with the lever. He said: “O Lord! We mean nothing but good when doing this.”

And he kept hitting with the lever with utmost care. No one else had the courage that day to participate in tearing down the wall. They wanted to wait a few days to see whether any bad things would happen to them; for if nothing happened, they would take this as a sign that the Lord was content with what they were doing. If something bad happened, they would give up the work and never think of it again. The next day had come and everybody had woken up just like the previous days. It was clear that the Lord was content with the work and so all the tribes took up the work that had already been designated to them, and the task of demolition was completed.

They had now reached all the way down to the foundations laid down by Prophet Ibrahim, peace be upon him. When they touched the foundations, they saw that the whole of Mecca started to shake, and fearing what would happen, they decided to build the new building on top of these foundations.2

The Ka’ba was rising stone by stone and when it came to the most important pillar of the building, there was yet another disagreement between the tribes. Each tribe wanted to place the Black Stone, the Hajar al-Aswad, which they deemed to be holy, themselves. There was no way to resolve the dispute, such that they were looking for ways to attack each other. This was a fearful situation because the wounds of the Fijar battles were only just beginning to heal and such a conflict could bring the tribes near another battle that could last hundreds of years.

It was at this moment that the oldest man of the Quraysh, Abu Umayya, stood up and spoke to the Meccans who were waiting for the smallest provocation to attack each other: “O people of Quraysh! You should appoint a judge among you and thus end this dispute! Let the first man that enters the doors of the Ka’ba be that judge and let him judge among you and do as he says!”

First they debated this suggestion and then decided that it was fair. They did not want to create animosity among the tribes for a task they had set out to do in the name of good works. They had all accepted this suggestion and now they had to wait for that first person to enter through the doors. It was a Monday. 103 Monday holds a special place in the life of the Messenger of Allah, peace and blessings be upon him. He was born on a Monday and he received his first revelation on a Monday in the Cave of Hira. The day he started the migration to Medina was on a Monday, and the day he arrived in Medina was on a Monday. The day in which he preferred the Hereafter and left for a higher companionship was also on a Monday. See Suhayli, Rawthul Unf, 1/129. After a long and silent wait, everyone had become all ears, and they tried to guess to whom the footsteps belonged to. The first face that the Quraysh saw entering the doors was Prophet Muhammad, peace and blessings be upon him. When they saw him they all said:

“Look! The Amin, the Trustworthy, is coming! We will be content with his judgment.”

Muhammad the Trustworthy, peace and blessings be upon him, enquired after why they were all looking at him and why they had started to cry out after seeing him; he was told of all that had happened. He then asked them to bring a big piece of cloth. Soon after they brought it to him and were watching him with great curiosity.

First the Messenger of Allah ﷺ laid the cloth on the ground, and then carrying the Black Stone with his own hands, placed it on the cloth. He could see that people were watching his every move, and so he said:

“Each tribe should hold a side of the cloth and lift the stone.”

It was a clever solution, and no one could say anything against it. Thus, every tribe would participate in placing the stone and lift it up all together. When the stone came to where it was to be placed, he approached it, took it into his exalted hands and put it in its place. It was clear that Allah wanted His Last Messenger to place this stone. This stone’s origins were in Paradise and had come to the earth with Prophet Adam, peace be upon him, and had inhabited the Ka’ba from the time of Prophet Ibrahim and Ismail, peace be upon them, and He had arranged the timing. In truth, everything was reverting to its original state with him. The whole incident had been managed by the Messenger of Allah, the possessor of a higher intellect. With the stroke of a genius, the work of the repairs which had stopped for days restarted and finished as planned.3

Our noble Prophet had made trade with a young man called Abdullah ibn Abi Hamsa and the young man had incurred some debt to him. They had agreed on when and where the debt would be paid and then gone their separate ways. When the arranged day had come, the Messenger of Allah went to the designated place and started to wait. He waited there until the evening.

But Abdullah had forgotten his word and had not come to the appointment. The noble Prophet continued to wait a second day. But the young Abdullah did not come that day either. On the third day, Abdullah remembered his appointment with Muhammad the Trustworthy and rushed to the place of the meeting. He was embarrassed to have forgotten his appointment. When he came to the appointed place he saw, as he had expected, the Pride of Humankind was waiting for him, for he had turned his face towards where Abdullah was likely to come and had been waiting for three days in case he would still come.

When he saw Abdullah coming towards him in haste, he was happy and relieved. But in order to make a note of what had happened, he said the following: “You young man! You put me in a very difficult position. I have been waiting for you here for three days.”4Abdullah ibn Abi Hamsa would relate this incident of the Meccan period years later, after he himself had become a Muslim, thus making a historical note of an important incident.